Stepson, age 25, alleged stepdad assaulted him during confrontation at home. Stepfather and stepson's mother were going through a somewhat amicable divorce at the time. Thorough investigation uncovered that stepson had long been disrespectful and dismissive of stepfather and that stepson had ulterior motives because of the divorce and also to shake down stepfather for money for unrelated medical treatment he attempted to tie to the assault. Case against stepfather dismissed with prejudice. 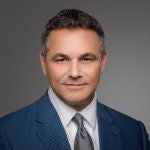