The judiciary system, or court system, is the branch of government that interprets law and applies it to given facts in a case. The term also refers to the collective public and private personnel who operate within the system such as judges, prosecutors and lawyers.

The United States court system is a dual court system which consists of the separate federal and state courts. Federal and State courts each have it's own laws and constitutions. Within each of these systems is a court hierarchy, and each court has a jurisdiction (general or limited), which means they hear different types of cases.

In Washington state courts, hierarchy is structured by flow of cases and seriousness of the case. In each, court proceedings are heard by judges, who are officials that are elected or appointed to interpret and apply the law to each case. All justices and judges are licensed to practice law in the state of Washington. Motions in a case can be heard by court commissioners, who are appointed by the court to assist in the judge's heavy case loads. Most frequently court commissioners hear family law issues and issue decisions which are called rulings. Because the commissioners are appointed and not elected judges, a ruling by a commissioner can be subject to review by a judge within ten days. 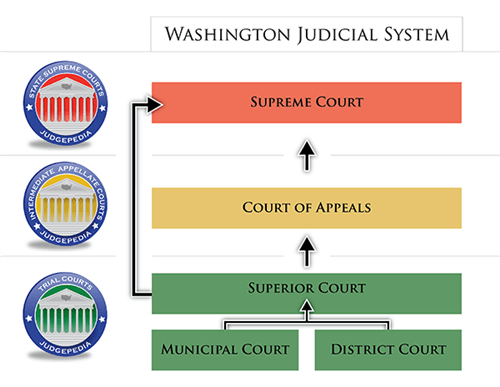 The Washington State Supreme Court is located in the state capitol of Olympia. The Supreme Court is the highest court in the State whose opinions and rulings are published. The court is also referred to as the court of last resort, as the published opinions are the state's final rule making authority. The opinions of the State Supreme Court also set law for the state by establishing what is called case precedent. The Supreme Court opinions can be cited in future cases by attorneys and judges as the proper manner in which a law should be interpreted and applied in certain circumstances. The court is comprised of 9 justices who are elected and serve 6-year terms. In the event of a seat vacancy, a replacement justice is appointed by the governor.

There are three Washington Court of Appeals, each with it's own geographical division, located in the cities of Seattle, Tacoma and Spokane. This intermediate court considers and reviews criminal and civils final judgments from Superior Courts based solely on the rule of law. These courts are also referred to as the court of second instance, as they review a case for a second time to determine if there were any procedural violations or errors in the interpretation or application of law. The court will then issue a directive as to whether or not the appealed issue should be affirmed, reversed, remanded or modified. The judges are elected and serve 6-year terms.

Washington State has 39 superior courts, one for each county. Superior courts are trial courts of general jurisdiction which hear all civil and criminal cases including all felony cases, which are generally more serious crimes than misdemeanors. In these trial courts, evidence and testimony is procedurally admitted and governed through rules of evidence. Superior court judges are elected officials and serve 4-year terms.

Each of the 39 counties in the state of Washington has a District Court. Unlike Superior Courts, District Courts have limited jurisdiction. Meaning, they hear only certain types of cases such as civil cases under a certain financial threshold and criminal cases that are gross misdemeanors and misdemeanors. District Court judges are elected officials and serve 4-year terms.

Some Washington cities may establish Municipal Courts. Municipal Courts are limited jurisdiction and may only hear gross misdemeanor and misdemeanor criminal cases that occur within a city's boundaries. Judges are elected or appointed by mayors or city councils and serve 4-year terms.